Performing live can be scary for new musicians – especially if it’s your first gig. I’ve been playing live now for a little over 27 years now. Thousands of gigs! (Thats me in the pic above playing live at The Gaylord Palms, Orlando in 2013)
I’m still learning.. and like any good musician, you should be too!
If you want your live performances to go smoothly, make sure to avoid some of these common mistakes.

Throwing your band’s setlist together with no thought is never a good idea.

The setlist is the order in which you play your songs. While this may seem insignificant, it can have a major effect on your ability to play as well as the audience’ overall engagement. Consider the energy and vibe of your songs and try to space out your most energetic songs throughout the set.

Lately I’ve been on a Metallica kick since this months release of the ..And Justice For All Remaster.
Take a look at Metallica’s recent setlist from October 13th, 2018 in Austin, TX:

They open super strong with a fast, new song and follow it up with 2 upbeat thrash metal classics. They slow it down in the 5th tune and give themselves (and their audience) a break with Unforgiven.
Of course, closing strong is really important. What better closer than Master of Puppets right? Ideally, you should start and end on your most powerful songs. For Rock and Metal musicians, this will prevent you from getting worn out too quickly. By doing some planning to pace yourself, you’ll have more energy while also keeping your audience engaged without having a lull at the beginning or end of a set.

Also, plan to have a few extra songs on standby just in case you get called up for an encore or finish your set too early…especially if you’re in a cover band.

It doesn’t matter how well you (or your band) play if your sound is absolute garbage… maybe it’s your gear? Unfortunately, I’ve learned over the years…. It’s just not worth trying to save a few bucks when it comes to music equipment. It also shows the world you’re ready for the big time and not fooling around with music just as a hobby.

The thing about good gear is, it just lasts longer too. Guitars, mics, drums and most quality amps and good speakers will last for years.  Sure you’ll go through tons of cables, picks, strings etc., but a great guitar will last you a lifetime.

The Worst Guitar I Ever Bought: “In 2004 I bought a Peavey EVH Wolfgang. I had been a huge Eddie Van Halen fan since I was a kid and needed a decent backup for my amazing ’89 and ’95 PRS Guitars. By that time, really good guitars were getting up into the $2000+ range, so I wanted to spend a bit less on a backup. At around $1200, the EVH Wolfgang seemed like a steal. Hey, Eddie was using them right?”

“Wrong. What a piece of junk. I gigged with it (around 200 shows a year) for just under 3 years and it was falling apart. I sweat a lot when I play and it had eroded the cheap pot metal Floyd Rose tremolo copy. (editor’s note: a real German-made Floyd Rose will never rust). Aside from that, the volume and tone pots wore out and the bridge pickup died. Unreal.”

“Lesson learned. Stick with a high-quality, proven, pro name brand like PRS, Fender, Gibson etc. al. I should have known better as Peavey was never known for quality guitars. I’m sure Eddie had 100 of them with a guitar tech on the payroll to keep them all in tip-top shape.”


Failing To Practice Your Music Enough

Avoid embarrassing slip-ups such as forgotten lyrics or bad notes by practicing as much as possible. Ideally, you want each song to become ingrained in your muscle memory so that you don’t have to think about it musically or struggle with it physically. This will also allow you to concentrate on your stage presence and feeling the vibe of the room.

The last thing you want is to be a “shoegazer” who looks deep in thought and struggling with what you’re playing. If you’re a singer, avoid lyric sheets, iPads, music stands or anything that makes you look unprofessional. It drives me crazy when I see a singer using an iPad or music stand for lyrics in a bar or club gig. Memorize the songs!

“In my opinion, the only musicians who should be looking at lyrics and/or sheet music on stage are Classical and Jazz Musicians.”

Guitarists, bassists and drummers need to get on (and forever maintain) a regular practice routine. Maintaining your chops is essential to have great live performances regardless of what kind of music you play. Think of technique as the foundation for everything you do.

If you’re a guitarist, maintaining a regular guitar practice routine that boosts technique will make everything you play easier and translate into better live performances. 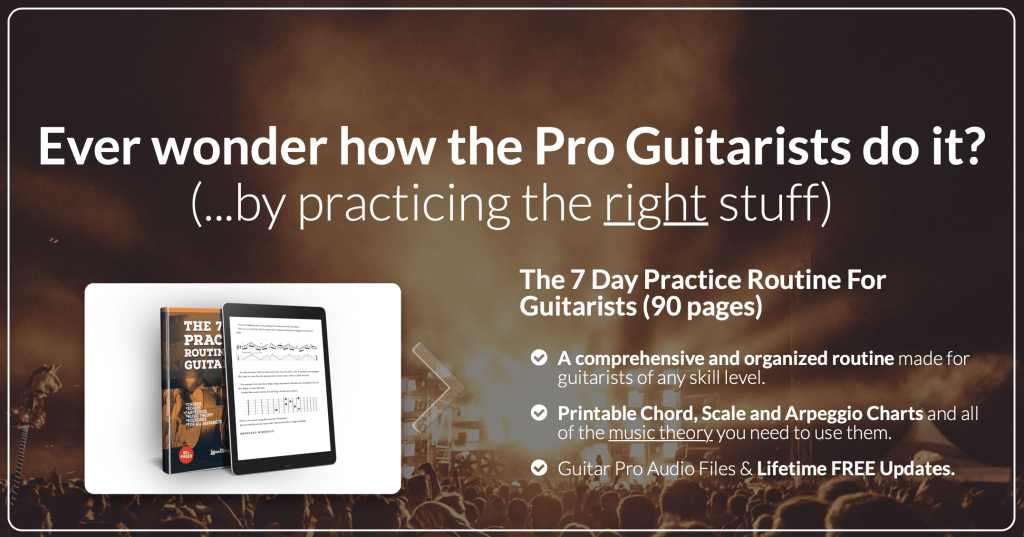 Even if your performance isn’t particularly energetic, the nerves could cause you to sweat more and get a dry mouth, which could impact your performance…especially if you take a few alcoholic drinks in-between sets. To prevent this, make sure that you’re drinking enough fluids – and not just alcohol (too much of this will actually dehydrate you, not to mention making your performance sloppy)… not that I would know anything about that. 🙂 You can buy water online to stock up on for your performances. Most venues will allow you to bring in and drink your own water.

Not bringing a spare guitar

This doesn’t apply if you don’t play guitar, but if you do, it can seem a bit obvious. If a string snaps, having a spare guitar could save you the annoyance of having to play the rest of your set with a broken string. I’ve finished many a song with 5 strings.. sometimes it can work, sometimes not. It’s definitely no fun.

You should never, ever stop playing when you break a string. Finish the song the best you can and then hurry and grab that backup guitar. If you don’t own a second guitar, get one ASAP. Backup instruments should be a priority for every musician playing live shows.

Most venues (particularly larger ones) will want you to arrive for a sound-check so that they can get the P.A. and stage set up accordingly. You may also be asked to do a brief sound check beforehand to ensure the mix and stage volume is okay. Skipping this isn’t advised if you don’t want your sound to be a mess.

Always be polite and follow the instructions of the sound engineer. Pissing off a sound guy is not going to help you or your band (trust me, I know). Try not to overplay at sound check and stop as soon as your levels are set. Nobody likes a noodler at sound check. These guys have heard it all.. so just get it done and prepare for the actual show.

Having No Stage Presence

Back to the “shoe-gazer” reference for a minute. Somewhere along the line being a Rock Star or jumping around on stage kind of became passe. I get it, it’s going to be a little bit different for various genres of music, however, you should always exude confidence whatever you’re playing live in any musical situation.

Your music isn’t always enough to draw in the audience – people sometimes also need visuals in a live setting. This is where stage presence comes in. Moving your body, smiling, grunting, whatever… makes people notice you and it also shows your audience that you’re having fun.

Try to practice not just what you’re playing, but how you compose yourself on stage. You can do this by performing in front of bandmates or friends and family in order to get feedback. There are lots of tips on how to develop stage presence online.  Check them out and watch what your favorite artists are doing too. Failing to interact with the audience

Audience interaction is also important, especially on a local level. Take the time between songs to talk to your audience even if it’s just telling them what the next song is, taking requests, telling a joke etc. al. This will tell people that you’re not just there to play background music but to get people participating in what you’re trying to do on stage.

Not every crowd is going to be the same. If you’re playing to lots of people that know you, you can afford to be yourself and give people instructions. If it’s a crowd of strangers, you may want to be more careful – test the waters with some crowd participation. If people aren’t feeling it, don’t continue to beg for it as you could start annoying people.

The thing about good gear is, it just lasts longer too. Guitars, mics, drums and most quality amps and good speakers will last for years.Click To Tweet

You’re more likely to get people participating if a venue is full of people – if there are only a few people, they’ll likely find it awkward if you keep harassing them. Also, consider the venue’s main purpose. If it’s strictly a music venue where people go to listen to live music, it’s okay to be more full-on, but if it’s a bar where people are having a casual night out or a restaurant where people are there to eat, you may want to be more subdued and feel it out a bit.

As I’m writing this, I’m getting ready to head out for gig number 3 of 5 this week. It’s Thanksgiving Eve and I’d love to stay home and relax tonight.. but duty calls. If you want to make a living playing music you have to treat it like a day job. Sure, it’s work.. but it can also be a rewarding career, even on a local level. After all, we can’t all be Rock Stars.